Carman Domenic Licciardello is an enigma in Christian music, often described as part evangelist, part Vegas Showman. His concerts were more like a rock and roll Billy Graham Crusade than a Christian music event. After all the singing, dancing, clapping and preaching, throngs of people would stream down to the counseling area to accept Christ-many times as many as 5,000 in an evening. Admission was usually free, a simple offering taken, similar to 30,000 churches on Sunday mornings. And he filled the largest stadiums the world over. In fact, Carman holds the record for the largest Christian concert ever in Dallas, Texas. But it even goes beyond that. If you take the Mega Stadium acts that played the famed landmark such as Pink Floyd, U 2, Madonna, The Jackson Five, Paul McCartney, Garth Brooks and even Metallic, you'll see that, as the newspapers noted, the one act that drew the highest attendance in Texas Stadium was Carman, with 71,132. This is more than just an A-list artist-this man is a Cultural Phenomenon.

To find out more about Carman, please visit Carman.org. 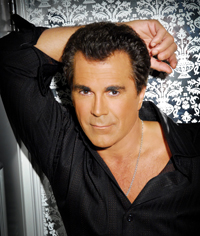 Ready to find out more?

Contact the Ron Blackwood Agency to book this artist.